The workshop was organised with the objective of bringing together the SBN stakeholders and share the results of 2017 activities, discuss on the major challenges and opportunities and devise the way forward.

The important part of the workshop is that participants discussed on the major challenges of the sesame sector highlighted in the presentations. Unavailability of  alternative quality seed, limited availability of technology, late input availing, limited use of improved agricultural practices, variability in fertiliser recommendations, pest and disease infestation, limited input credit, limited preparation for marketing, less commitment of the task force at different levels, problems in ECX store management, labourers discipline problem, unavailability of mung bean mung bean market  were among the specific challenges raised and discussed in the workshop.

Suggestions made during the discussions

Dr. Teshome Wale, from federal ATA said it was good that the presentations asses the major challenges of the sector. However, almost all the demanding challenges were raised in the mobilisation workshop held before the production season. They are presented here again. There is a need to walk the talk. Responsibilities should be clearly identified.  We need to determine who should do what…He also informed participants that those challenges which could not be solved by the SBN value chain alliances can be presented to the Regional Transformation Council (RTC).

With regard to the quality seed problem, Mr. Tsedalu Jemberu, GARC’s director informed participants that the centre has multiplied 40 quintal quality sesame seed and interested bodies can get from the centre. Commonly people do not take the quality seed that we have in time. He added if there is a high demand, the problem in quality seed can be addressed within two years’ time. GARC can also fetch Abasina quality seed from Pawi Agricultural Research Centre.

Mr. Gizachew Tefera from ECX Authority Gondar, said the store management practice in ECX has been improved. It was only in Abrhajira that we were not able to solve the challenge soon but now it is improved there too. Regarding the labourers ill-discipline in the ECX markets, he said the problem is beyond ECX. This need to be solved by the administration. 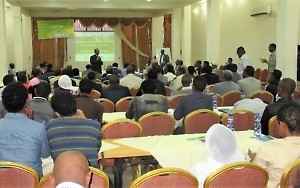 Partial view of the workshop

Mr. Mekonnen Yelewemwessen from ACSI said cost-benefit analysis should be done in the sesame business. The cost of sesame production seems to be higher than the benefit. It seems the business is subsidised. At least, in three years’ time, the business needs to exceed the breakeven point and fetch a profit. Commercial farmers are claiming to have 10,000 credit ETB per hectare. This is not acceptable. The maximum production cost should be known and we can avail 50% of that cost. We work with this kind of credit evaluation and appraisal. Loan diversion is a serious problem currently and this needs to be addressed.

Ambassador Wuletaw Mebratie, Director of Amhara Region ATA emphasised on the importance of cluster farming approach. He said we cannot bring the desired change in a fragmented farming system which is like chasing own tail. Cluster farming increases the productivity of wheat in North Showa and Eastern Gojjam areas. We should learn from this and use cluster approach.

Welcome to the Sesame Business Network (SBN) of Northwest Ethiopia. We are an innovation network, owned by the stakeholders of the sesame sector. Our collective aim is improved performance and shared benefits for all stakeholders.

As part of the BENEFIT Partnership, we contribute to improved food and nutrition security and improved livelihoods through better performing markets.